Learn Why These 6 Facebook Campaigns Are Brilliant and Why They Work!

If you’re scrambling for a fresh way to approach your next Facebook campaign, you’re not alone.

Given the recent changes to the Facebook algorithm, many marketers are stuck scratching their heads when it comes to their future on the platform.

“How can I make sure my posts aren’t getting buried?”

“Should we totally give up on organic reach and go all-in on ads?”

“Which sorts of ads are going to give us the most bang for our buck, anyway?

Perhaps the best way to break down the answers to these questions is by assessing what is working for brands today.

Listen: now’s a prime time to reassess how you approach Facebook. That’s why we’ve outlined some recent success stories from brands, ranging from killer ads to smart posts that receive tons of love organically.

And with these brilliant examples from big brands in mind, you can roll out your own Facebook campaign that totally slays.

Time after time, Airbnb ticks all the boxes of how brands squeeze so much out of their Facebook presence.

Airbnb relies heavily on user-generated content from their satisfied customers to fill their feed. This allows them to show off eye-popping, exotic locations that their followers can fall in love with.

And since Facebook’s algorithm favors visual content over links, such a strategy spells good news for their organic reach.

Additionally, the brand uses any given campaign as an opportunity to go back-and-forth with their customers. By emphasizing customer care and picking their fans’ brains through asking questions, their posts stand to score more engagement as a result.

Airbnb is also cited as a success story by Facebook themselves for how the brand managed to take advantage of remarketing ads. The brand basically targeted on-site visitors who looked up potential vacation spots and then served them laser-targeted deals. 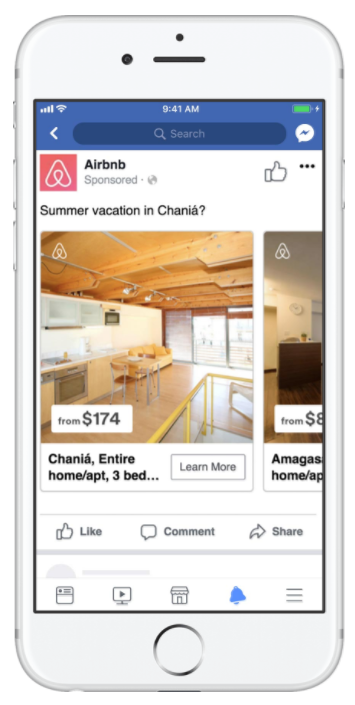 Not only did Airbnb manage to triple their Facebook ad ROI, but also lower their cost per acquisition by 47%.

Halo Top is a shining example of a brand that knows how to drive positive discussion on their posts.

As part of Facebook’s recent algorithm changes, the platform cracked down on excessive engagement bait. That is, brands can’t shamelessly beg for comments, “Likes” and tags in an attempt to game the algorithm.

Halo Top implements frequent tag-a-friend and giveaway posts, but does so in a tasteful manner that doesn’t feel desperate. This is done in part by having a diverse content strategy that’s constantly cycling through different types of posts.

The key to any successful is engaging with your audience. Halo Top does exactly that by mixing things up with their audience, commenting back-and-forth and giving their followers something to look forward to.

Oh, and the brand is also living proof that social media contests still have their staying power.

Denny’s is somewhat of an anomaly when it comes to their social presence.

Not afraid to post the downright bizarre from time to time, Dennys’ success is proof that sometimes the road-not-taken actually helps get more eyes on your brand.

These sorts of posts are also prime for comments whereas “safe” content could otherwise go ignored.

Brands could learn a lesson from this approach to driving engagement without ruffling any feathers in the process.

The takeaway here is two-fold.

For starters, video content is totally killing it on Facebook, amassing billions of views per day as more and more marketers are shifting their ads from static to video.

Easy to digest at a glance and complete with or without sound, such videos can grab the attention of scrollers on the go and don’t require as much of an investment for marketers to produce.

The power of authenticity and user-generated content are both well-documented but are perhaps best displayed by Toyota’s “Feeling the Street” Facebook campaign.

In this contest, Toyota put out the all-call on Twitter and Instagram for street musicians to show off their style using the #FeelingTheStreet tag.

After acquiring entries, the brand actually used that fan-submitted content as the basis for a series of Facebook ads.

According to a case study by Stackla, Toyota’s Facebook ads featuring their Feeling the Street musicians resulted in 1.2 million engagements and a 440% increase in total Facebook engagement over the previous year. 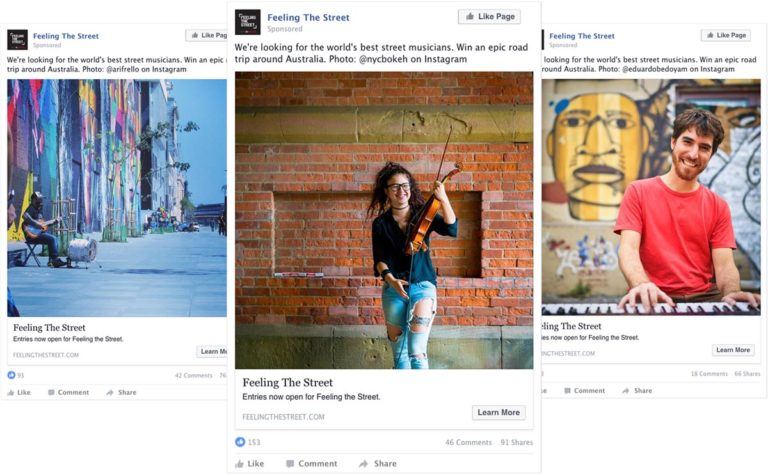 Again, authenticity counts. Your satisfied customers are often your best billboards, so consider ways your existing fans and followers will aid your advertising efforts.

Also, the success of this campaign also speaks to how much creativity matters when coming up with your Facebook advertising strategy.

Instead of using product photos are stock images, brands are knocking it out of the park with videos and UGC. Facebook provides marketers with plenty of room to get creative when it comes time to cook up an ad, so ask yourself what you’re doing to ensure that yours stand out from the crowd.

GameStop managed to build a massive Facebook audience without hitting their followers over the head with deal after deal.

The brand’s bread and butter is nerdy, niche content that often takes the form of, you guessed it, short videos.

Probably seeing a pattern with the emphasis on video content here, right?

Well, there’s a reason for that. Not only does Facebook insist that brands post video content to encourage discussion, but doing so is arguably easier than ever.

Between Facebook tools that convert written content into video, to Facebook’s own native Boomerang app, getting started with video is a cinch.

Beyond their organic videos, though, GameStop is yet another Facebook Ads success story.

As part of the brand’s holiday marketing Facebook campaign, the brand decided to double-dip their video content with their ads, using this popular clip as the basis of their campaign:

Coupled with the video, GameStop ran ads showing off multiple deals that spoke to each individual sect of their audience depending on their preferred gaming rig.

This essentially allowed them to squeeze more out of their ad spend and speak to as many people as possible in a single campaign. 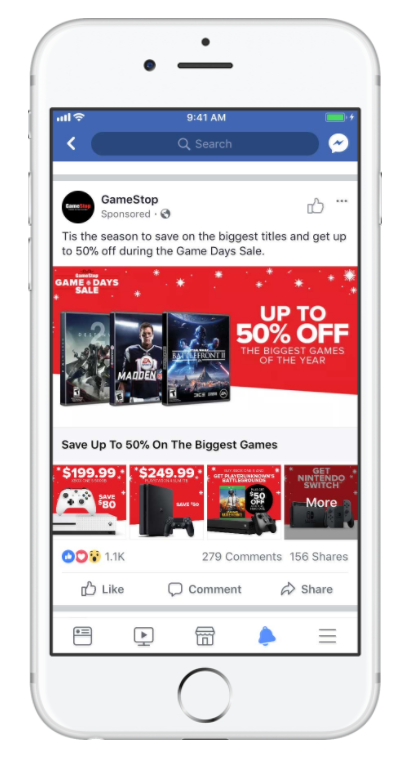 GameStop’s holiday Facebook campaign was a winner, resulting in 7.5 times increase in incremental ad spend and a 4% lift in conversions. As an added bonus, this campaign also allowed GameStop to display their deals without spamming their followers.

As highlighted by Garmin, static visuals have their place and time for brands on the platform.

Using Facebook carousel ads, the brand managed to win over on-site visitors using Facebook pixels and a lookalike audience of potential buyers at the same time.

The big benefit of carousels is the fact that brands can highlight multiple products and features within the same ad, all the while providing an interactive experience. 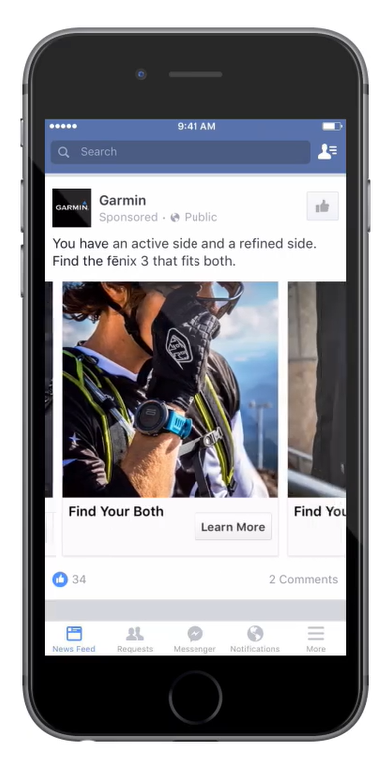 Tapping into the power of Facebook remarketing has become an expectation for brands looking to win over new customers and Garmin did so brilliantly in their case. According to Facebook, one particular campaign scored a 9.7 times return on ad ROI and 1.8% average CTR.

Facebook allows brands to get so granular with their demographics and data that you can target exactly who you need to while results in fewer wasted clicks and a higher ROI.

While Garmin has the benefit of boasting a product that’s prime for snapshots, any business can see why experimenting with creatives and honing in on your target audience is so important these days.

Seeing is believing for customers today who aren’t exactly jazzed to read through walls of text. If you can tell a story visually, go for it.

What Do You Have in Mind for Your Next Facebook Campaign?

Conventional wisdom and widespread panic might tell us that traditional Facebook campaigns are a no-go, but that couldn’t be further than the truth.

Brands today instead need to understand what’s working on the platform today and the tactics outlined above are fair game for marketers of all shapes and sizes.

Listen–running a Facebook campaign might be a bit more complicated than it used to be in the face of the new algorithm. That said, those willing to do their homework in terms of creative content and ad types can still totally kill it.

Now, let us know what you have in mind for your next Facebook campaign. Looking to get started with retargeting or video ads yourself? Let us know in the comments below! If you need any help, we are here for you! Get in touch if one of our top dominators today and start growing you business today!

The Power of #TikTokMadeMeBuyIt

Is It Time To Rebrand?